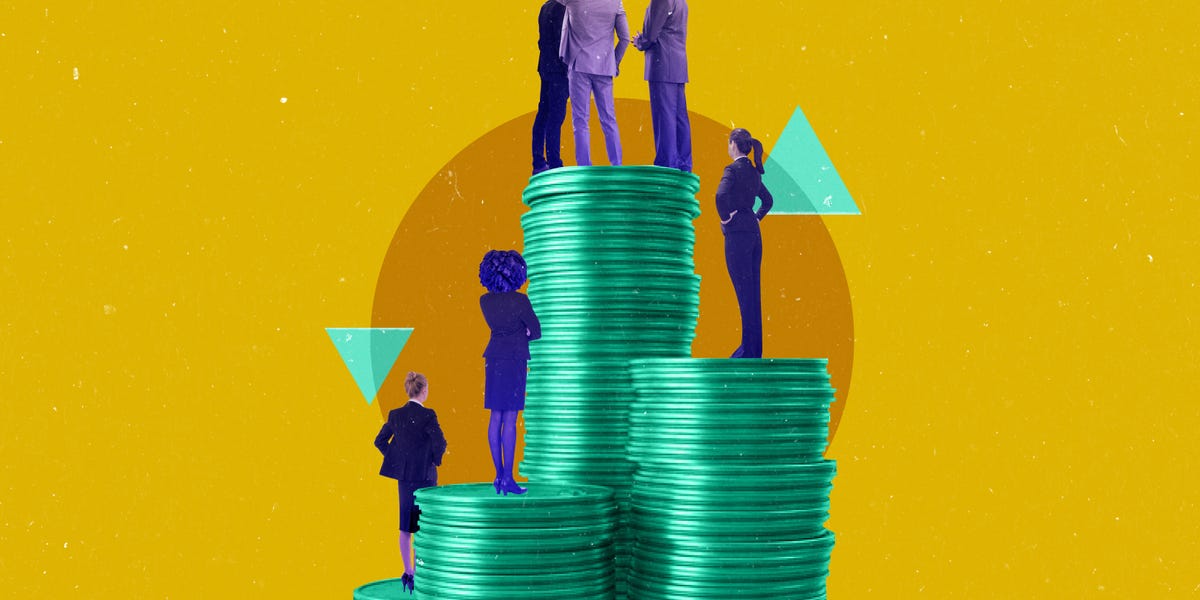 Women Invest Less Than Men. Here’s How to Fix That.

Women are historically underrepresented in the investing space — both professionally and as investors of their own wealth. Women make up a fraction of fund managers, financial advisors, investment analysts, and venture-capital partners — and from a consumer standpoint, a mere one-third of women said they felt confident in their ability to make investment decisions.

Although women have increased their investment activities in recent years (particularly during the pandemic), the disparity between genders is still strong — and experts say the lack of female representation only perpetuates the cycle and keeps generations of women from investing to their full potential.

Women are underrepresented in investing

There’s a long and troubled history surrounding women and money. In the 1960s, most women couldn’t take out a loan without having a male cosigner with them. Some lenders even required “baby letters,” asking women to agree not to have a child during the loan’s term. While society has made strides since those days, data shows that women are still at a strong disadvantage when it comes to accessing and growing their wealth. They’re also severely underrepresented in the financial and investing industries as a whole.

A study from BNY Mellon Investment Management found that most asset-management companies said that 10% or less of their fund managers and investment analysts were women. Another report showed that 18% of financial advisors were women. And in venture capital, 89% of all partners were men.

“As investment professionals, women are consistently underrepresented in all aspects of the industry, from high-level positions in banking, private equity, venture capital, and finance to retail and institutional portfolio management,” said Kristen Howell, the general counsel at the real-estate investing platform CrowdStreet. “While there’s extensive research to validate this, I see it firsthand as well. As a high-level finance executive, I’ve consistently been among the only women in the room.”

Ultimately, this underrepresentation has a trickle-down effect. It not only means fewer mentors and resources for women interested in these lucrative careers but also offers fewer role models for women on Main Street — those simply looking to invest their money and grow their wealth.

“In all facets of our life, we benefit from seeing people like us leading the way and making decisions,” said Sandi Bragar, a chief client officer at the wealth-management firm, Aspiriant. “Role models encourage us, motivate us, and inspire us. Seeing more women in high-profile investment roles will help others — women and men — feel more confident participating in their own personal financial decisions.”

What happens when we invest in girls and women

“Women are on their way to controlling the majority of the wealth in both the United States and the world,” said Lacy Garcia, the founder and chief executive officer of Willow, a women-focused financial-education platform. “In fact, women are expected to hold between $81 trillion to $93 trillion of the world’s wealth by 2023 and stand to inherit the majority of $30 trillion in intergenerational wealth transfers in the US over the next decade. To put it bluntly: Less women investors means less growth for the wealth pool.”

Finally, there are the types of investments that are furthered when women get involved. A study from RBC Wealth Management found that women investors were significantly more interested in, or already involved in, fostering environmental, social, or governance improvements for the greater good. BNY’s study also showed that 53% of women said they would invest (or invest more) if the investment fund had a purpose for good.

“Many women want more than just financial returns,” said Kristina Church, the head of responsible strategy at BNY Mellon. “Women are more focused on responsible investing and making a positive outcome for the environment and society. Our study found that were more women to invest, up to $1.87 trillion could flow into more responsible investments. These are transformational sums.”

Carving a path to investing inclusivity for women

It’s clear women need more representation in the investing world. Though there’s no single key to making this happen, seasoned female investors say there are small steps we can start taking — in business, in society, and in our own interactions with the world — to make a difference.

Financial education has often felt off-limits for women. Leslie Thompson, the chief investment officer and a cofounder of Spectrum Wealth Management, said, “In high school and college, you see investing clubs or finance-related classes that are male-dominated, making it difficult and intimidating for females to join.”

Improving this boys’-club mentality is critical, many say, to making women feel welcome and empowered in the investing world.

Nancy Tengler, chief executive officer and chief investment officer at Laffer Tengler Investments is one of the many experienced investors working to do that.

“I speak at Title I schools across Arizona to instill the love of investing in grade and middle school to lower-income students,” Tengler says. “I came from a single-mother family who worked two jobs. We saved. We didn’t invest. Once I began to invest, I appreciated firsthand the power of saving to invest.”

Erin Bellissimo, a managing director at the Notre Dame Institute for Global Investing, is another longtime investor working to change the scene for women in investing. She was a founding board member of Girls Who Invest, a nonprofit dedicated to increasing the number of women in investment fields. She also works on Notre Dame’s The Power of Investing Program, which aims to help high-school seniors learn about the value of compounding interest in wealth-building.

“We’re targeting women and underrepresented minorities,” Bellissimo said. “While I hope they think fondly of Notre Dame and apply to Notre Dame, and we, therefore, get a richer, more diverse environment, I just hope they get that knowledge for life.”

“We love putting people together and expanding networks because I think that’s a big part of business,” Bellissimo said. “It’s not just for opportunities. You can be smarter and better at your job if you have a bigger network, too.”

2. Improve diversity in hiring and recruitment.

Improving diversity has been an important topic in recent years, and many companies have made concerted efforts to both recruit and hire a more diverse workforce. A study from McKinsey showed that since 2016, the number of women in C-suite roles jumped 27%.

While these are certainly marked improvements, continuing this effort, pros say, will be critical to getting more women involved in investing.

“Women are underrepresented in many ways in the investing world,” said Rose Niang, the director of financial planning at Edelman Financial Engines. “The fields of finance and investment have historically been male-dominated. When you don’t see other women in certain positions, it’s harder to imagine yourself in that position. Increasing the visibility of women in the investing world is important, but we also need to normalize it.”

But it’s not just women in general that financial firms should be focusing on. Recruiting women of color needs to be prioritized, too. A report from Cerulli said that about 3% of financial planners were Black, 5% were Latino, and 4% were Asian — and that included both men and women.

“Our history of the suppression of women’s financial rights, coupled with racism in America, leaves women of color furthest behind in the race to financial security,” said Jill Fopiano, the president and chief executive officer at O’Brien Wealth Partners. “It’s difficult for many women of color to find reference groups or mentors to talk with about their money — perpetuating the taboo around the topic.”

3. Pay women fairly and work to retain them.

Hiring more women is only the first step. To keep women empowered and engaged in the investing space, there must be sincere and meaningful efforts to nurture, reward, and retain them once in the ranks. This includes offering mentoring opportunities, as well as having leave policies that allow women to manage their familial obligations.

“We need to enable much more flexibility in the workplace and to remove the stigma and make it normal for men — as well as women — to take paid and unpaid time out for child and family commitments,” said Samantha Seaton, the chief executive officer of Moneyhub. “I was inspired by the example of co-op boss Jo Whitfield, who took a break from work to help her teenage sons with their exams. Choosing to step away from work should be normalized and encouraged so that we don’t think twice to hear of men and women taking leave for family reasons.”

Important: Women make 84% of what men earn, the Pew Research Center said. This gap is smaller for younger women, with those 25 to 34 earning 93 cents to the dollar.

“Women are the driving force behind new business formation in the United States, but female founders remain at a disadvantage when it comes to funding,” said Linda Davis Taylor, a former chief executive officer of Clifford Swan Investment Counselors and the host of the “Money Stories” podcast. “While their businesses grow faster, they receive less than 3% of venture-capital funding.”

“Fewer women in leadership at VCs and investment firms leads to less investment in female and diverse founders,” said Nafeesa Jafferjee, a cofounder of the financial platform Quirk. “One way to help is to support female-led funds. They tend to invest more in women and women of color, and it’s the best way to increase support for women who do tend to build companies that are also for women.”

Frances Simowitz, the chief executive officer of WEVE, an all-female startup accelerator, said it all goes back to hiring more women.

Women are making great strides in the investing world, but there is still work to be done. Improving access to financial education, hiring and retaining women in investment-focused careers, and backing more women-led businesses are a few ways society can continue improving representation from the ground up.

Aly J. Yale is a freelance writer, specializing in real estate, mortgage, and the housing market. Her work has been published in Forbes, Money Magazine, Bankrate, The Motley Fool, The Balance, Money Under 30, and more.
Prior to freelancing, she served as an editor and reporter for The Dallas Morning News. She graduated from TCU’s Bob Schieffer College of Communication with a focus on radio-TV-film and news-editorial journalism. Connect with her on Twitter or LinkedIn.