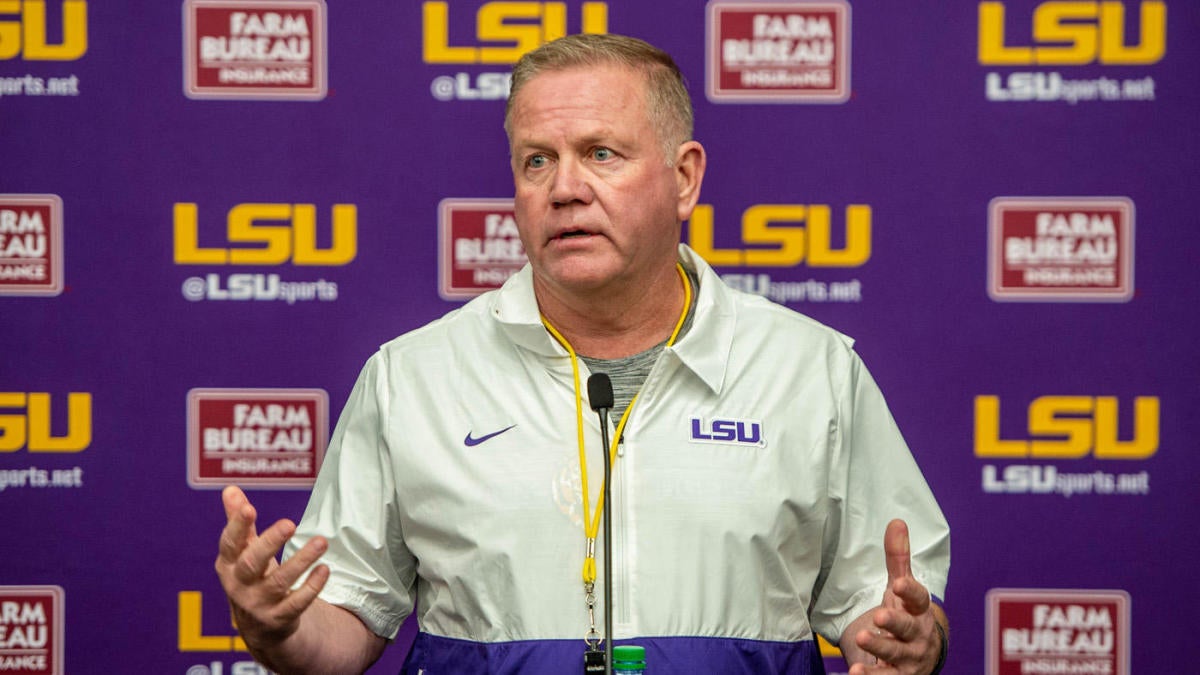 BATON ROUGE, La. — Like all good coaches, Brian Kelly knows what lies ahead. The college football world has wanted a definitive answer for a while now as to why the ex-Notre Dame coach has changed jobs, cultures and, um, accents to take over as LSU’s new coach.

“The million dollar question, right?” Kelly told a visitor. “It only took, what, 3 minutes [to ask]?”

Actually, it was 6 minutes into the conversation. You want to ease into the tough queries with a subject such as Kelly, though he was glad to oblige.

“Did you walk in downstairs and see the training table?” he asks from his second-floor office.

Of course. You can’t miss executive chef Michael Johnson’s elaborate layout on the bottom floor of the LSU Football Operations Building. Johnson is so talented and so dedicated that he travels out days ahead of time for road games as sort of a culinary quality control coach. Johnson once ran into undercooked chicken prepared at a team hotel. This being the uber-competitive SEC, he wasn’t sure it was an accident.

“Did you walk into the Gug?” Kelly followed up, referring to Notre Dame’s Guglielmino Athletics Complex. “There is no training table. We bring food in from the cafeteria. You get a sack lunch, a box lunch.”

“That building had been built not to service those areas. That wasn’t the vision the university had. I don’t have a problem with that. They had built that building to meet and locker and that’s it. We had outgrown that. I had asked for that to be addressed in 2016, and we were at 2022.”

Eventually, Kelly was out the door. It would be simplistic to say Notre Dame’s winningest coach bolted over lack of complex carbohydrates, but he’s the one making the points. LSU has the best of everything — same as Notre Dame, just in a different way.

After 12 years, perhaps it was just time to try a different “best”. It’s fair to say Kelly had grown apart philosophically from his superiors at Notre Dame. Whatever the case, it’s the process that makes his migration here one of the best stories of the offseason.

“We were just at a different place,” Kelly said. “I don’t blame anybody. We were in a different place in terms of what I thought the next step [should be] after five consecutive 10-plus winning seasons.”

“I’ve got one more run in me,” the coach added. “Do I wait four more years [for my requests to be addressed], or do we take a run at this?”

After winning 113 games over 12 years leading the Irish program, it only took only 10 days for Kelly to say “yes” to LSU. On Nov. 22, 2021, Kelly said it would take a “fairy godmother [who] comes by with that $250 million check” to pry him loose from South Bend, Indiana. He was introduced at LSU on Dec. 2 with 10-year deal worth $95 million. Approximately 70% of it is guaranteed.

Kelly may not have been a first choice. LSU reportedly offered Texas A&M’s Jimbo Fisher $13 million a year. Lincoln Riley’s name was also mentioned before the ex-Oklahoma coach bolted to help revive the USC program. But when it became obvious Kelly was interested, LSU athletic director Scott Woodward jumped. The pair have a history as Woodward had interviewed Kelly at Washington 14 years ago before hiring Steve Sarkisian.

“High IQ, very organized, won everywhere he’s been,” Woodward said. “When I knew I had a shot at him, I got real serious real fast.”

Shortly after that, he became “BK Unplugged” — half unbarred by whatever Notre Dame strictures existed, half assimilating into the unique Louisiana culture.

“I had no idea I was speaking with a Southern accent,” Kelly said.

But don’t miss that the coach is immersed into the transition from buttoned-up to party down.

“Content is the new arms race of everything. He buys in,” said Emily Dixon, LSU’s executive director of creative content. “He’s been open to everything.”

Suddenly, a Massachusetts native has arrived by way of a Midwest religious flagship to take over a fallen SEC power.

“I wish I could kind of cover it up and say, ‘This is culturally backwoods,’ but there’s nothing to that speaks to that,” Kelly said of his assimilation as Orgeron’s replacement.

“There is nothing green in your diet down here,” he added. “Vegetables are an afterthought. Everything else is étouffée and red beans and rice. I love it. The food’s great … people are friendly, unpretentious. They love football. It’s Catholic. There’s a freakin’ Catholic church on every street corner.

“Everybody has been like, ‘Oh what about the transition?’ It was probably harder in South Bend than it was to [go to] Baton Rouge. You’re coming into a situation where you know why you’re here. You’re here to win a national championship and play in the American League East.”

The Major League Baseball reference is a comparison to the SEC West — the toughest division in the sport. In these parts, a 10-win season isn’t good enough, and Kelly — who has never even attended a raucous night game in Tiger Stadium — will find that out soon enough.

Kelly has brought in 42 new staffers since his arrival. They are networked together by Teamworks, a software operating system that helps athletic departments organize and communicate. It is the collegiate standard. Kelly says when he arrived there were two schools not using Teamworks: Wake Forest and LSU.

“They were communicating here like an old-fashioned pad of paper,” he said. “It took me a good two weeks to figure out what the operational systems here were. A lot of it started with Nick [Saban] and never really changed much.”

Saban took over at LSU in 2000 and quickly showed what could be accomplished at what was then just a middling SEC program. Saban put an imaginary recruiting fence around the state and won the national championship three years later. Les Miles followed with his own national title in 2007, and Orgeron made it 3-for-3 among LSU coaches in the 21st century with his record-breaking Tigers team in 2019.

Kelly talked extensively to Saban before and after making the move to get advice.

“It starts with the ability to recruit within 3 hours of your campus,” he added. “The facilities are outstanding, but you can screw up facilities. If you understand the state of Louisiana and how to recruit these young men, you’re going to win here at LSU. Each one of those coaches did.”

Alabama and Georgia squared off in the CFP National Championship for the second time just this past season. SEC teams have taken nine of 14 spots in the last seven national title games.

That sends the clear message that you don’t need to win your conference to play for it all. That’s secondary to LSU fans who watched their Tigers finish in a tie for last in the SEC West for the first time since 1999.

The buzzwords surrounding Kelly’s hire include “structure” and “accountability”. LSU has fallen off the map a bit, but Kelly knows how to build a program. He brought with him from Notre Dame the “SWAT” program that awards points for things like on-time meetings, proper meal plans, etc.

“I needed 19 years of head coaching experience to f— up the first couple of years at Notre Dame,” Kelly joked about his 16-10 start in his first two years with the Irish. “There will be some rough spots [for Freeman]. He’s smart. He’ll lean on the people around him.”

While Kelly may have traded box lunches for shrimp gumbo at the training table, he has also traded for more pressure. LSU faithful expect to compete for national championships, and that means beating Alabama, Texas A&M and Auburn to merely earn a spot in the SEC Championship Game.

This will have to be a honeymoon season. After attrition — academic ineligibility, transfers, injuries, medial disqualifications and graduation — Kelly says he was down to 36 scholarship players. That’s why he hit the transfer portal like a frat boy hits the bars at closing time.

247Sports has the Tigers at No. 3 nationally in its transfer portal rankings. That includes bringing back Myles Brennan — a sixth-year, oft-injured quarterback who had entered the portal but chose to stay — and Arizona State transfer Jayden Daniels.

If you haven’t figured it out yet, Kelly is all in on the new him. He took the time to tweet a mini-bio of every Tiger who signed in the latest recruiting class. It is refreshing that he can wrap up 85% of his recruiting class in a car.